Tree planting for our common home in ARCORES Philippines

Responding to the challenge of the Life and Mission Project (LAMP) 38 of the Recoletos Educational Apostolate in the Philippines concerning Ecological Awareness, Colegio San Nicolas de Tolentino-Recoletos (CSNT-R) highlighted its 51st Foundation Anniversary celebration with a Tree Planting activity at the Hacienda Cabatangan, Brgy. Concepcion, Talisay City, Negros Occidental last January 28, 2022. Already in its 3rd year of annually organizing such tree planting event, this year, in collaboration with the Talisay City Environment and Natural Resources Office (CENRO), CSNT-R officially established the tree planting site as its adopted ecological zone to maintain and protect. The area is part of the Northern Negros Natural Park which is under the strict protection zone of the Department of Environment and Natural Resources.

The pandemic did not stop the school personnel together with the religious administrators to trek the rugged path going to the site. Assisted by the CENRO Head, Engr. Warren Paduano and the members of the Bantay Bukid with City Councilor Carl Lizares and his team, 130 seedlings of hard wood trees were readied to be planted. The School Director/Principal of CSNT-R and Chairman of REAP LAMP 38, Fr. Anthony A. Morillo, OAR blessed the seedlings prior to planting. A symbolic marker with the School’s Statement in establishing the site as its adopted area was signed and installed. To date, 230 trees were already planted by CSNT-R in the area, with 70 trees already grown to about 3 meters out of the first 100 seedlings planted in January 2020 as reported by Engr. Paduano. City Councilor Carl Lizares, chair of the City’s Committee in Education, commended CSNT-R for its efforts in organizing this kind of activity.

A set of garden tools and slippers for Adults and Kids were then endorsed to the community through their team leaders, which were donated by the Recoletos de Talisay alumni Batch 1996. The 51st Foundation Anniversary of the school was made more meaningful with the establishment of its adopted ecological zone, and by looking out and nurturing this area, it is staying true to its mission of forming lives through excellence in the spirit of Caritas et Scientia, by caring for our common home, to which Pope Francis specifically pointed out in his encyclical Laudato Si, “Young people demand change. They wonder how anyone can claim to be building a better future without thinking of the environmental crisis and the sufferings of the excluded.” Vamos San Nicolas, Vamos Recoletos! 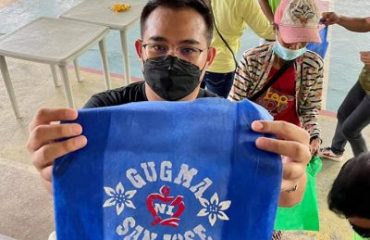