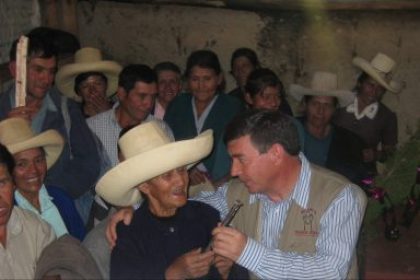 From Haren Alde to ARCORES

It was on May 30, 1997 when Fr. Javier Pipaón, prior general of the Augustinian Recollects at that time, decreed the creation in Chota (Peru) and in other countries, of the NGO Haren Alde, which means “In favour of”. In Spain it had been created a little earlier, on the 14th of December 1992. The purpose of this organisation was to organise and carry out, in the best possible way, all the social and charitable activities of the Order of Augustinian Recollects. Fr. Severiano de Cáceres was appointed president of Haren Alde in Chota.

Fr. Severiano was already secretary of Caritas when he was appointed president of Haren Alde. Before Fr. Severiano’s arrival, some social works were already being done in the parish of All Saints, such as drinking water systems and training of health promoters, with subsidies from Spain. Along with Haren Alde came also the Star Project, in which godparents from Spain sponsor children from Chota. This programme has always been and still is present. At present, there are 134 children sponsored from Spain and 26 with Peruvian sponsors.

Severiano has given much greater scope and coverage to the social programmes. Between 1999 and 2000, he carried out a large-scale latrine campaign, in which 2,000 latrines were installed in villages near the city of Chota. He worked in two different periods in ARCORES Chota, from 1997 to 2002, and from 2008 to 2011; eight fruitful years in total.

ColiseoAfter the first stage, he was succeeded by Fr. Jacinto Anaya, who stayed from 2002 to 2007. During this time, in addition to drinking water systems and latrines, the Haren Alde Coliseum, which is the largest in the region, was built. In March 2006, he succeeded in getting our NGO registered in the public records, while at the same time deciding to separate it from Caritas. Therefore, he moved the offices to the parish house for more independence.

Offices in the parish of St. Monica

Fr. Alfonso Lozano was president of Haren Alde in Chota from 2007 to 2008. During his mandate, the offices of ARCORES Peru were built at the entrance of the parish of Santa Monica. In this way, independence from the parish house was achieved, while at the same time a close collaboration between the parish and ARCORES was established. Father Lozano was also in charge of painting the Coliseum in a colourful and artistic way.

Fr. Julián Montenegro served this organisation from 2011 to 2014, continuing the good work of the previous presidents. Since October 2014, it has been my turn to preside with pleasure over this important social institution of the Order in Peru. Alongside me, working in ARCORES Peru are the project manager, Miguel Vega, who has been with this institution for the longest time; two nurses, Margarita Vásquez and Cecilia del Rocío Núñez; the accountant Nalda Núñez and the engineer Esteban Monteza. In addition, Fr. José Estebas serves as treasurer. Finally, two engineers, four master builders and three workers work on a project basis.

At this time, we have built drinking water systems in four communities, financed by the government of La Rioja (Spain); two of them have already been completed and recently inaugurated. We are also building improved kitchens, last year in a total of seven communities and this year we have already installed them in five. Finally, we are carrying out a project for the empowerment of rural women, which includes the installation of family bio-gardens, guinea pig farms and improved kitchens for the benefit of 75 families in both Chota and Cochabamba.

During these 25 years, we have been attentive to respond to emergencies. For example, in 1999 we rebuilt houses in La Púcara destroyed by a major landslide. Later, in 2018, we started up the water system in Los Porongos, which had been destroyed by the rains of the El Niño phenomenon. In 2020, we also helped during the pandemic.

Our organisation attends to the most pressing needs of our people, especially farmers, on the principle that those who apply for a project commit themselves to providing labour and local materials. Thus, in the last drinking water project, the beneficiaries worked between 30 and 40 days each.

In addition to the great benefactors in Spain, here in our parish we also have several collaborators or volunteers who help us in the work of the Star Project and in the community works, as well as some catechists who act as liaisons. And we always welcome people who want to contribute to community work.

After these 25 years, we ask the Lord for the strength to continue working in his vineyard, by this means which consists in giving better living conditions and promoting the health of our population, especially the peasants, in the northern part of Cajamarca in the Peruvian Andes.

Tree planting for our common home in ARCORES Philippines